Today, Nicole our Homestay Coordinator, showed the students how to make Delicious Dumplings in our onsite Campus kitchen.

But what are Dumplings????

They have become extremely popular across the world. In Asian cuisines, they are delicate, bite-sized treats of different fillings wrapped in a thin layer of dough. They can be both savory and sweet, and may be boiled, steamed and fried – the choice is yours! Known as jiaozi to the Chinese or gyoza to the Japanese – the dumpling is a popular Asian cuisine to many, regularly consumed and enjoyed. 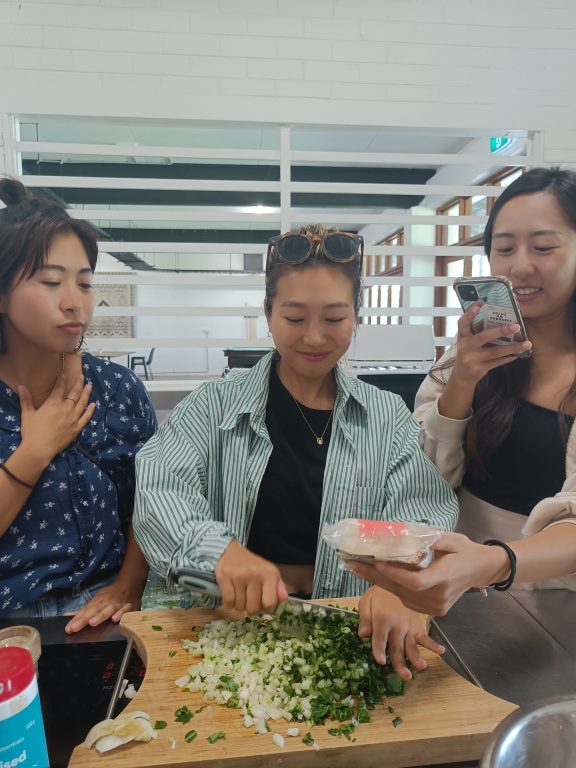 What are they made of?

The dough is made of three main ingredients: flour, water and salt. But which flour you use depends on which variety you want to make. In terms of the filling, dumplings are great because they are versatile, much like the Bao Bun. Whether you have a sweet tooth – or if you prefer a more savoury snack, you can make your dumpling to suit your taste and mood!

We bought the ready to go Gyoza Wrappers from the supermarket for this activity.

What fillings can I use?

What makes a great filling for those little dough pockets? The best thing about the Gyoza is that it is completely versatile. Whether you prefer a savoury filling, or if you have a sweeter tooth – a dumpling can appeal to all tastes. Using your own imagination and taste can help you create a dumpling in the flavours you fancy, and with the ingredients of your choice. Popular dumpling fillings differ by region – some may be more popular than others in different countries. There are many different fillings including meat, cheese, fruits and sweets which are all combined with vegetables to create a wide variety of delicious dumplings.

Dough filled pockets around the world:

In North America for instance, “dumplings” often refer to just globs of dough that are thrown in soups, stews, and sauces (like the iconic dish Chicken and Dumplings for example). Of course, international dumpling varieties like gyoza, pierogi and jiaozi have become very popular as well.

In Asia, they refer to dough wrappers filled with meat or vegetables, with tasty dumpling fillings that vary regionally.
In Europe, potatoes are a much more common dumpling ingredient, as seen in dumpling varieties like Polish pierogi which use potatoes in the filling, or German Kartoffelknödel and Italian gnocchi, where potatoes form a fundamental part of the dough. The thin dough + filling combo is also common in Italy (where you’ll find ravioli, tortellini, etc.) and former Soviet countries (where you’ll find yummy dumplings like pelmeni).

In Africa, popular dumplings include steamed bread-esque globs like Madombi or Fufu, which are popular accompaniments for hearty stews.And in Latin America, fried dough pockets like empanadas are a popular treat, although weirdly, these aren’t as commonly referred to as dumplings as some of the varieties mentioned above, just like Indian samosas. 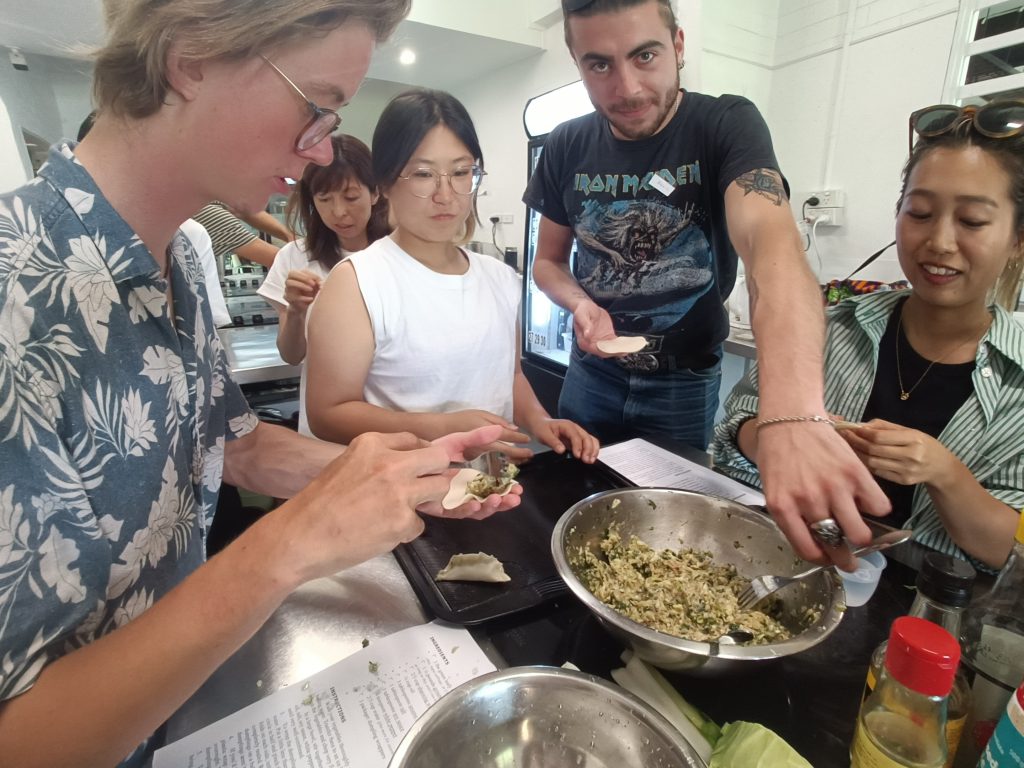 Are Dumplings and Gyozas the same?

Originating in China, the dumpling, more commonly called the pot sticker, is made of wheat flour dough wrapper filled with meat and/or vegetables. This common side dish is cooked many different ways. Dumplings are most commonly steamed, pan fried, deep fried, or boiled.

Gyoza
While jiaozi dates back about a thousand years, gyoza is a much more recent innovation. During World War II, the Japanese ate jiaozi while occupying Manchuria. After returning home, some Japanese sought to recreate the jiaozi back home using Japanese ingredients and preparation methods. The gyoza was soon born with a thinner dumpling wrapper and more finely chopped stuffing. The dish is most commonly pan fried to create a wonderful crispy texture that also enhances its unique flavours.

How to make them:

if you can’t find Chinese vegetables in the supermarket, we also encourage the use of other green leaf vegetables. You can go with baby bok choy (the tender little green ones. Not the giant, stringy monstrosities you find at Stop & Shop), napa cabbage, or Chinese chives. If using fresh, all of these vegetables need to go through a blanching process, with the exception of the Chinese chives (which can just be chopped finely and then thrown in with the meat).

Wash your veg to get them really clean. No one likes a sandy dumpling. Blanch them for a minute and throw them in an ice bath.
If using frozen ji cai, just defrost the veg, rinse it well under cold water.
Then, ring out the veggies like you’re squeezing a washcloth. Get all the liquid you can out of them.

Get out the chopping block and chop the veggies very finely. As finely as you possibly can, or the filling will be overly stringy. 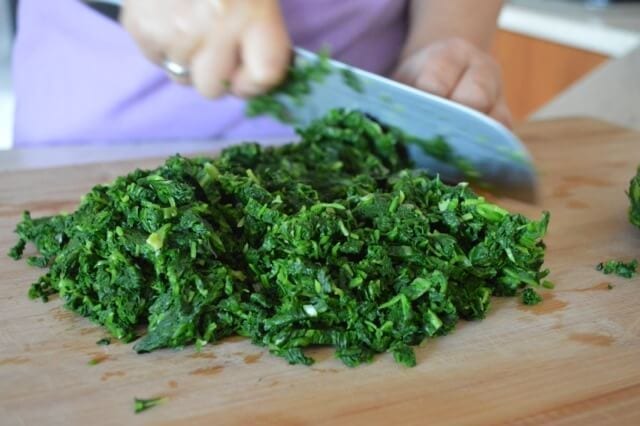 Throw it in with your meat. You can change the ratio of meat to vegetable in this dumpling recipe to however you like.

What you’re doing here is creating a very soft, smooth texture for the filling. It’s really important to mix your filling until it almost looks like a paste. We find that grabbing two chopsticks in one’s fist, followed by 6-8 minutes of thorough stirring yields the best filling consistency.

Boil a test dumpling and taste it for salt and flavor. Perhaps you added a little more meat than our dumpling recipe called for. Perhaps your salt isn’t as salty, or your soy sauce is a different brand than we use. It’s not an exact science, but the only way to figure out how to get the flavor right is to test and taste. Add a little of this or that…sesame oil, soy sauce, salt, pepper, wine, water…if you think it needs it. Once you’ve got the perfect filling, go through the dumpling folding steps.

It’s an art in and of itself to try to adjust the filling amounts you put in as filling and wrapper supplies deplete–to try and use all of both. If we have more wrappers, I reduce the amount of filling I put in a bit. If we don’t have enough, then I make bigger dumplings. But if you end up with leftovers, don’t sweat it. You can wrap up extra dumpling wrappers for later, and make the filling into little meatballs and fry them up. 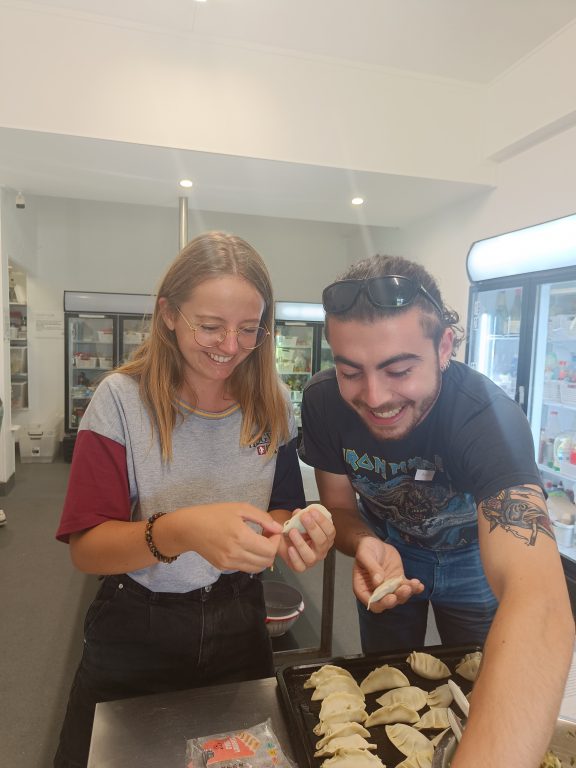 How to cook them:

To boil: just bring a large pot of water to a boil and throw the dumplings in there. If using fresh, they’re usually done when they float to the top and start to look transparent. If using frozen, they may need a bit longer to cook through.

To pan-fry: Heat a non-stick pan or cast-iron skillet over medium high heat and add a couple tablespoons of oil. Add the dumplings in a circular formation around the pan and allow them to fry for a couple minutes. Then, pour a thin layer of water into the pan. Cover and reduce the heat to medium-low. Steam until the water has evaporated.
If they still look a little raw, put in some more water, cover the pan again, and steam them for a little longer. Once all the water has evaporated and they look cooked through, raise the heat to medium high and allow them to cook uncovered until the bottoms are golden brown and crisp.

To steam: Steamed dumplings are not only one of the healthier ways to go, they’re delicious! The outer wrapper stays firm and a little chewy. This is also one of the better ways to cook dumplings if you really want the flavor of the filling to shine through. Fill a wok (with lid) or metal steamer with water.

All of the students enjoyed their time making these dough wrappers. Some of them had never heard of this typical Asian dish and were very impressed. It took some time for the students to wrap the filling in the dough and to make it stick together, without falling apart. But everyone managed and loved the taste of them. The Japanese girls were super quick in wrapping the filling and it looked quite professional!
We used a recipe and tweaked it a little from this webpage.
The woks of life webpage also has many different Asian Cuisine recipes and cooking instructions.