Have you seen dolphins in Byron Bay? 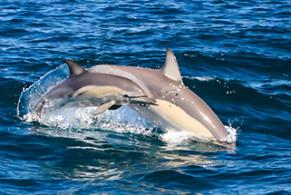 “Byron Bay is now known as one of the best places in the world to watch and encounter dolphins and whales in their natural environment.” 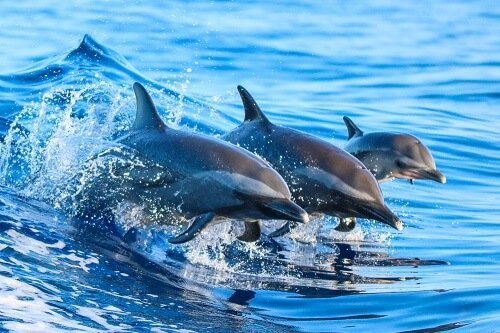 Here are the three most commonly encountered dolphin species in the Byron Bay area:

Found all around the Australian mainland, IndoPacific Bottlenose Dolphins grow to about 2.5m in length, weighing between 150kg and 250kg when fully grown. They are a dark gray colour on the upper dorsal side and light gray to white on their underbelly, though size and shape varies with region.

Bottlenose Dolphins are very social animals and often have a dominance hierarchy that can be sexually segregated. Females live in large groups and maintain a large network of associates within their home range. Mature males can form a strongly bonded alliance with at least four other males.

They live in groups called pods, which usually range in size from 1 – 20, but have been found in groups of 100 or more. Bottlenose dolphins display many different types of behaviours including leaping, surfing, bow riding, and tailslapping.

Dolphins produce a range of sounds described as whistles and clicks. The clicks are used for echolocation, which assists in navigating and feeding, while the whistles are thought to be used to locate other animals, identify and to maintain contact.

Common dolphins are found all around Australia. They are much smaller than the bottlenose. They grow to 1.7-2.4m in length and 70-110kg. They are a gray, black to brownish colour on their upper side, an hourglass patch down their side with a yellowish colouring extending from their eye down to their dorsal fin. Their pectoral fins, tail fluke and rostrum are also dark gray in colour and their underbelly is white to off white.

The size of the pods they are found in can range anywhere between 10 and 2,000 individuals and they are commonly found in open ocean waters of around 180m in depth. Common bottlenose dolphins are generalist feeders and their diet consists mostly of fish and squid.

In the Byron Bay - Ballina area they are found seasonally, with most sightings made during winter and spring, though sightings have been made during summer. On many occasions, they have been seen feeding with bottlenose dolphins.

The Australian humpback dolphin is a vulnerable species. They are found in coastal waters around tropical waters of Australia. They can grow up to 2.7m in length, weigh up to 200kg. This species is typically a light gray colour on their upper side, and white on their underbelly. They have a longer beak and smaller dorsal fin than the Indo-Pacific bottlenose dolphin.

Humpback dolphins are typically found in much small group of around 2-4 individuals with aggregations of around 30 individuals infrequently encountered. They are also commonly sighted with the Indo-Pacific bottlenose dolphin. They are opportunistic feeders, and will eat a variety of different types of prey.

While the closest known resident population of humpback dolphins are found within Moreton Bay, we do have frequent sightings of this species in the Byron Bay region during Autumn.

The coastal area around Cape Byron is where these dolphins feed, reproduce, teach and care for their young and most importantly, rest.

The best places to site see dolphins in Byron Bay are:

Goodluck dolphin watching in the bay! Most people see them most days at sunrise and sunset which happens to be their feeding time 😊