After a really fun week at Lexis in Byron Bay, Dominic presented our students some of the finest Australian beers for a Beer Tasting.

Of course, many students signed up for this activity! 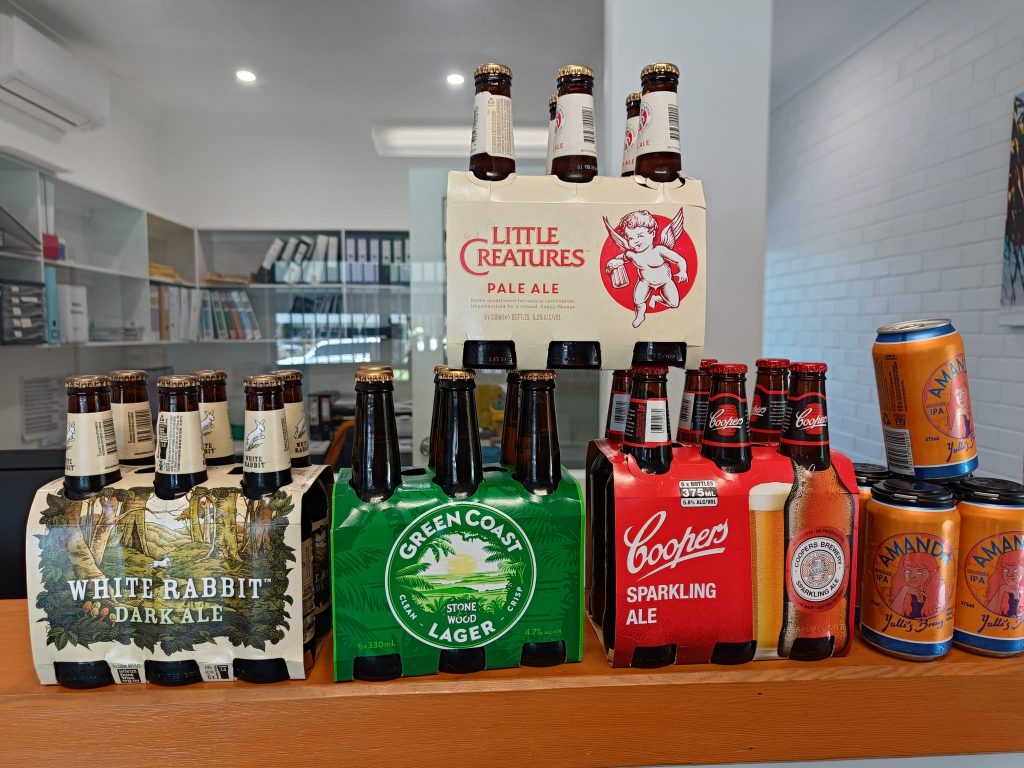 Born and raised in Byron Bay, Stone & Wood is proudly brewing approachable beer in the Northern Rivers of New South Wales.
Named after the hinterland that rolls into the ocean, Green Coast Lager is brewed with a blend of the finest malts and noble hops and left unfiltered for a natural yeast cloud. Clean, crisp and the perfect accompaniment to food, Green Coase Lager balances its subtly spicy hops with a soft malt profile.

More about Stone & Wood and their different beers, here

Coopers Brewery Limited, the largest Australian-owned brewery, is based in the Adelaide suburb of Regency Park. Coopers is known for making a variety of beers, the most famous of which are its Pale Ale and Sparkling Ale. This sparkling ale is a true taste of Coopers History. With its famous cloudy sediment and distinctive balance of malt, hops and fruity characters, our ‘Red Label’ is the ale by which all others should be measured.

More about Coopers and their different beers, here

White Rabbit: A Dark Ale with a chocolate flavor to try something different at the Beer Tasting

Beginning life in the leafy surrounds of Hellesville, Victoria – White Rabbit Brewery was born to be different. The White Rabbit Dark Ale is Rich and flavorsome, yet ever refreshing, this malt driven ale is beautifully balanced by an aromatic lift of hops. Subtle fruit derived from open fermentation compliments a strong backbone of toffee and chocolate, all bound together by a reassuring bitterness.

More about White Rabbit and their different beers, here

It started with a group of mates. All hailing from the beer scene, these guys wanted to brew an awesome, hop-driven American Pale Ale with a distinctive aroma and delicious flavor.

A huge shed (and former crocodile farm) on the water’s edge in Fremantle was to become the home of this beer and the birthplace of Little Creatures Brewing. Work began in 1999 and we swung the doors open in late 2000.
The beer that inspired this crazy journey, ours is a hop driven Pale Ale bursting with flavour and aroma. Full-bodied yet refreshing, the bitter finish will leave your tastebuds craving more. We use whole hop flowers in our Pale Ale, which gives it a pretty serious citrus and stone fruit flavor, balanced with specialty malts and a decent hit of bitterness.

More about Little Creatures and their beers, here

What happens when you combine a couple of mates, a bar full of the best craft beer NSW has to offer and a felafel roll working lunch?  It seems the answer is a craft brewery!
These were the exact ingredients that resulted in James Harvey and Karl Cooney forming Yulli’s Brews and releasing their first batch of beer in September 2014.
This American style IPA is layered with a range of mandarin flavor from a carefully selected malt & hop bill, and a whole lot of cold pressed mandarins blended with a concoction of orange peel liqueur (Cointreau).

IPA stands for India Pale Ale. There’s a history behind the name, going back to the British Empire and their colonies. It’s a style of pale ale that emphasizes hop flavors and aromas.

This Beer Tasting activity is not only about drinking beer though! The students had to work their way through some questions about the origin and the flavor of the beer. Dominic handed out some sheets and the students had to taste each of the beers and note what they taste.
In the end Dominic gave them the answers and they could see, if they were correct or if their taste buds were mistaken 🙂

The Beer Tasting activity was a great success!