Today, the students in the CAE class interviewed each other and then wrote a summary of what they learned. Here are the (slightly cut and edited) results below. 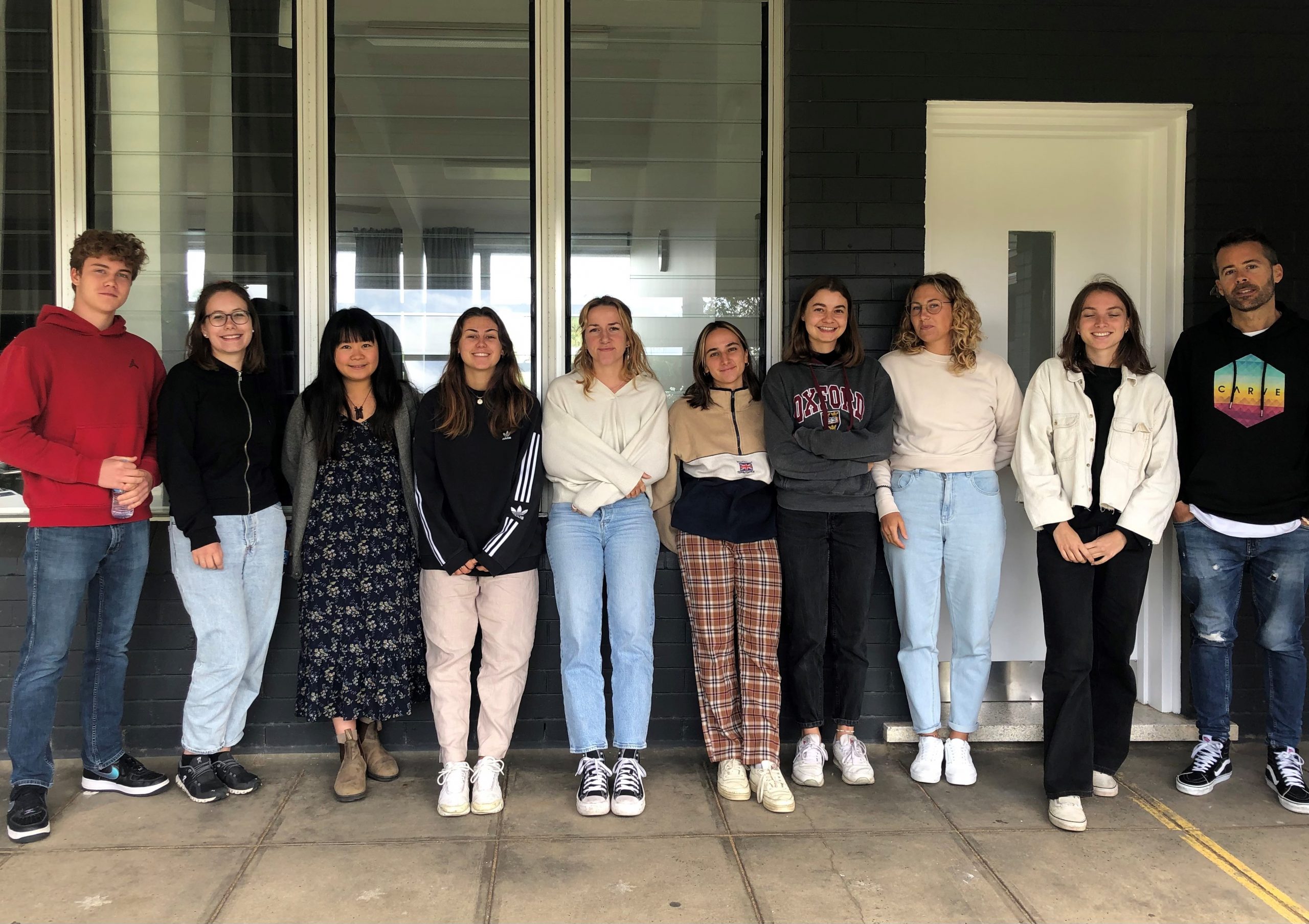 Angela is from the German part of Switzerland. She’s been in Australia for just a couple of days and she’s still feeling the jetlag. Angela has three sisters and the eldest one is expecting a baby in February.  She seems to be a very active person and wants to start taking surf lessons. She also likes theatre and any music genre, depending on the situation.

Sarah is a 19-year-old girl from a small village near Biel, Switzerland. She arrived in Australia a month ago and would like to stay for at least 6 months. Although she has a totally different character to her 23-year-old sister, they have a nice relationship. She has been surfing a few times and wants to surf in Byron for sure. She also loves reading and hanging out with friends and mostly likes rap music.

Carole is from Switzerland. She grew up in a small town close to Zurich. One month ago she decided to move to Australia to improve her English and surfing. It was hard in the beginning because she has 2 brothers and 2 sisters and she misses them so much. She would like to find a job in hospitality here because she worked in a hotel back home. Carole can speak three languages and is also a sporty person who likes to go running or swimming in her free time. She enjoys listening to all kinds of music.

Eliska is 23 years old and comes from the Czech Republic. She has three sisters who she gets on well with. Her degree is in Marketing and she enjoys doing all kinds of board sports. Elishka arrived in Australia five days ago and plans to stay here one year. She would like to find work as a waitress or a bar tender.

Pol is 25 and comes from Spain and has been in Australia for six months. He doesn’t have a big family but he gets on well with his brother. In Spain, Pol worked as a garden designer and studied music production. He already has two jobs in Byron Bay. He works in the kitchen of an Italian restaurant and also welcomes new Spanish students to Byron Bay. Pol speaks three languages and loves surfing. He also likes all kinds of music, bands and DJs.

Javier grew up in the south of Spain in a coastal city with 2 older brothers, who he gets along well with. He studied Law in Spain and also worked as a physiotherapist. Before he came to Australia, seven months ago, he travelled through Bali for two weeks. He works in both a restaurant and a shop in Byron Bay so doesn’t have a lot of free time but, when he does, he likes going to the beach to meet friends and listening to all kinds of music. Javier has had some surf lessons in Byron but hasn’t had time to improve his skills much yet but he hopes to improve more as the weather gets better.

David is from Switzerland and only arrived in Byron a couple of days ago. In Switzerland David works as an IT technician but he is not planning to work in Australia because he wants to study English and then travel for three months.  He is really into sports so looking forward to trying surfing. In his free time he also likes to hang out with friends and meet new people. David’s into rap, reggae and electronic music and he likes to listen to DJs at parties.

Julie comes from Switzerland and arrived in Australia 4 days ago. While in Australia, Julia would like to work in a clothes shop but in Switzerland she is a high school teacher. She can speak three languages: French, English and German. Her favourite activities are listening to music, meeting friends, and travel. Talking about music, she likes French rap and listen to techno when she’s out.

Yueh An is 31 years old and from Taiwan. She has lived in Australia for more than two and a half years. She has her own massage business with a friend. Back home Yueh An organised concerts and musicals. In her free time she’s often in nature and likes doing arts and crafts and carving. She can’t surf but she wants to learn.

Leandra arrived in Australia from Switzerland last Saturday. She has two younger sisters who she gets on well with. In Switzerland she worked as an optician, but she is not planning to work in Byron as she is on a tourist visa. She speaks German, French and English but doesn’t know how to surf. However, she’d like to learn. In her free time she likes to read, listen to music (pop is her favourite genre) and watch Netflix.

Oriana has already been in Australia for three months and at Lexis for one week. Back home in Switzerland she has many cousins but no siblings. She is photography student and speaks three languages; Italian, French and English. Her hobbies are photography, socialising and travelling. She can’t surf yet but wants to learn. The type of music she listens to depends on her mood and her preference for DJs or bands depends on the situation.

Marina is from Brazil. She has been in Australia for about 2 weeks and has already found a job in a vegan restaurant as a cook. In Brazil she worked as psychotherapist. She tried surfing when she was 14 but have never done it again. However, she loves reading, listening to music, dancing and going out with friends. She prefers bands to DJs and likes rock and Brazilian music the most.

Samira is from the German-speaking part of Switzerland and arrived in Australia two days ago. She has one brother who she gets on well with despite the big age different. She will be looking for a job here in Byron, either as a waitress or bar tender. In Switzerland she works as a medical assistant.  Hip hop is her favourite kind of music and she also likes travelling and hanging out with friends. She hasn’t surfed yet but wants to try it.

Mo is also from Switzerland, but from a city – Zurich. He’s keen on surfing but is a bit scared of the sharks here! In addition to surfing, Mo has a lot of different hobbies including climbing, bouldering, ice hockey and art … so you can see he’s a very active and involved sort of person.

Mo is doing the FCE course because it’s a pre-requisite for his future studies. Just as importantly, he thinks the FCE course is a great way to learn English and it gives him the opportunity to combine study with a surfing holiday. 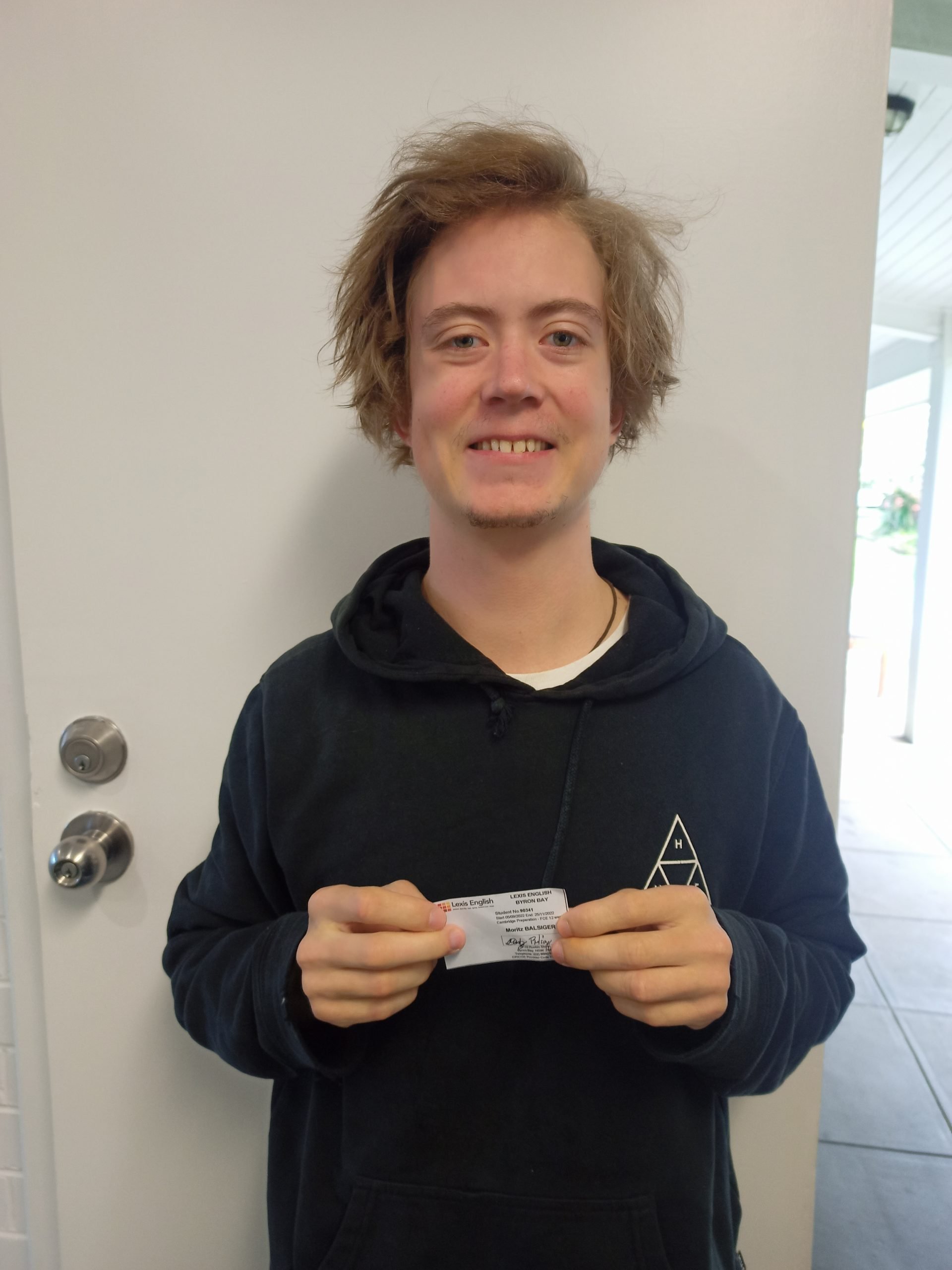 Nadja is from a small village in Switzerland (the German part), which has gorgeous views of the mountains.  On these mountains, she loves to go skiing and snowboarding but isn’t interested in other sports very much. Another thing she likes to do on weekends is to work (on a volunteer basis) with other young adults to design and conduct activities to entertain children.  However, working exclusively with children isn’t Nadja’s career goal – she wants to be an ambulance paramedic, and will begin her studies in this field in the near future. 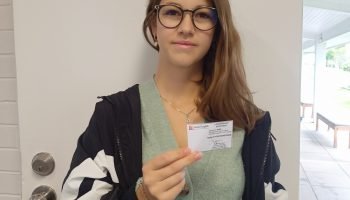