Today four of our students went out to the beach with a local surf school.

Let’s go surfing surf teacher Adrian picked up the students after class and took them to the main beach.

He explained the basic of surfing and what to do when you get caught in a rip.

The ocean is always changing and there are various factors that give shape to waves. Great waves are miracles of nature as there are so many different factors that need to be just perfect for excellent waves to form.
Every surf spot is different, and generalizing is difficult, but there are four main factors that you’ll always have to consider at every surf spot.

Swell, Wind, Tides and the Contour of the Ocean Floor / Shape of the Shoreline 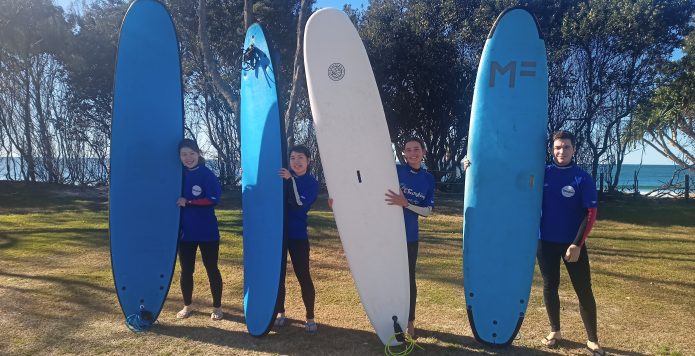 Lying and Balancing on the Surfboard

With you lying on top of it, the board will off course sink a few inches lower in the water. However, if you’re lying in the right place, the board will be floating at the same flat angle, relative to the water’s surface, as it was floating without you on top of it.
Most beginners make the mistake of lying too far back on the board. You’ll notice that if you float your board in calm water, without lying on top of it, the board’s nose (front end) will be at a certain angle, relative to the water’s surface.

When you lie on the board, make sure that the angle of the board’s nose, relative to the surface of the water, doesn’t change. The nose should not be sticking up into the air more than it did when you weren’t on top of the board.
The board needs to be flat on the water so that you can glide over the water with minimum resistance. If you’re lying too far back the board’s nose will stick up into the air, which means the tail (back end) of your board is pushing against the water in front it.

Putting too much weight on the back of your board is called corking, because the board’s nose is sticking up like a cork floating in water. Like I said, corking is a common mistake amongst beginners. You will paddle slow and not catch any waves if your board is corking.
You don’t want to lie too far forward either. Lying too far forward will make the board’s nose dig into the water. That’s called pearling. Move slightly back on the board to avoid scooping water with your board’s nose.
While lying on the board, move around slowly, until the board lies naturally flat in the water.

Find this balance point and, while lying on your board, take a mental note of your position. You can mark your position with a permanent marker or a sticker if that helps. Use this as a reference point to make sure that you’re always lying in the same place on the board and your toes should be touching the tail of the board.
If you are properly balanced you will have minimum drag through the water as you paddle. This is what you need to generate maximum speed. And you’ll need maximum speed to catch waves! 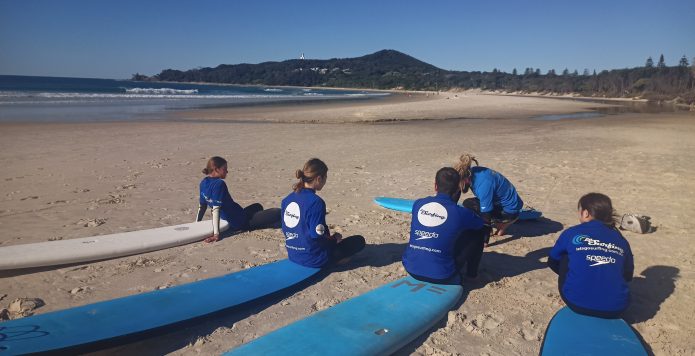 When paddling keep your chin up so that you can look around. You’ll need to paddle toward the beach and look ahead as you’re paddling to catch a wave, but you’ll also need to glance around and look back at the wave to check that you’ll catch it at the right moment. While paddling keep your feet together and push your sternum (chest bone) into the board. The aim is to pivot the board on your sternum while paddling.

To catch an unbroken wave you need to be paddling at the same speed as the wave is travelling. And bigger waves travel faster. So try not to surf the biggest waves you can find if you’re still learning. You probably won’t catch them. If there are more advanced surfers in the water and the waves look too big, rather watch and learn. Don’t go and get in their way.

If you’re a total beginner, it’s best to learn by first catching a few broken waves. Catching a foamie or whitewash is relatively easy. Lie on your board with the nose pointing straight to the beach and paddle until the wave catches up with you and starts pushing you toward the beach.

Catching an unbroken wave is more difficult. You need to be in right place. If you’re too far out the wave will pass underneath you. It won’t be steep enough for you to push yourself down the face. However, if you’re too close to the beach the wave will break on top of you.

To be able to accurately judge when to catch a wave requires some experience. You need to sit and wait in the right spot and start paddling at the right time. In the beginning you’ll miss most waves and some waves will break on top of you. But eventually you’ll be able to judge in advance exactly where the wave will break. This will enable you to start paddling at the right time, not too late, not too early, and you’ll catch the wave at just the right moment. Before it’s broken, but after it’s become steep enough for you to slide down the wave-face.

When trying to catch an unbroken wave, never stop paddling. It’s a common beginner’s mistake to stop paddling too early and try to stand up before actually riding the wave. 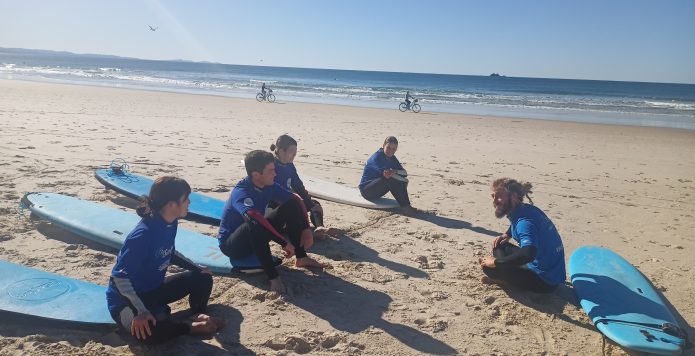 Learning to stand up!

As you’re riding the wave place your hands underneath your shoulders, palms down, as if you were going to do a push-up. Lift your shoulders by pushing on the board until your arms are almost straight. Note however that you are not doing a full push-up. Your back should curved with your legs still lying almost flat on the board.

Ideally you need to ‘sweep’ your feet in underneath your body, in one smooth movement, as you push your shoulders up. But that can be difficult for beginners. If you can’t do it one movement, break it down into parts, but always remember that eventually your aim is to do a ‘Pop-Up’, in one smooth motion. Breaking it down into parts must only be a intermediary step, until you’re actually doing a smooth pop-up.

If you need to break this into parts, avoid using your elbows on the surfboard. Always start with your hands firmly underneath your shoulders. NEVER use your elbows.

Avoid using your knees. After you’ve pushed your shoulders up and your arms are straight, bring your back foot slightly forward and step it onto the board. Then use your back foot to push yourself forward and up, stepping your front up between your hands.

Turn your hips so that you are aligned with the stringer (the line running down the middle of your surfboard) and only AFTER you’ve turned your hips let go with your hands and stand up fully. Do not let go with your hands before you’ve turned your hips. It is a common beginners’ mistake to try and turn the hips after standing up. If you do this, nine times out of ten, you will lose your balance and fall.

However, if you’re surfing a much bigger beginners board you should be standing slightly further forward, roughly in the middle of the board.

Your weight should be centered along the stringer. As if you’re balancing sideways on a tight-rope.

Remember to keep your body low. ALWAYS bend your knees. If you stand up straight you will fall. Your feet should be at least shoulder-width apart, but preferably slightly wider than that,  and allow your knees to bend inward.

Keep your arms relaxed, but keep them up for balance. Keep your upper body relaxed, but do not slouch. Your muscles need to be relaxed, but alert. Keep your front hand within your line of sight and always look up! If you look at your feet you will fall down! 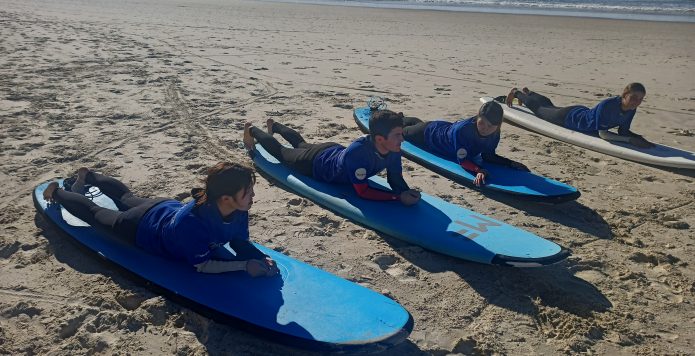 What to do, if you are getting caught in a rip:

If you’re caught in a rip current, stay calm, conserve your energy and consider these options:

The students had a great time!

If you want to know more about surfing or what surfboard to buy, click this link