Happy Halloween Celebration with the students in Byron Bay!

Halloween, contraction of All Hallows’ Eve, a holiday observed on October 31, the evening before All Saints’ (or All Hallows’) Day. The celebration marks the day before the Western Christian feast of All Saints and initiates the season of Allhallowtide, which lasts three days and concludes with All Souls’ Day. In much of Europe and most of North America, observance of Halloween is largely nonreligious. Halloween is celebrated on Monday, October 31, 2022. 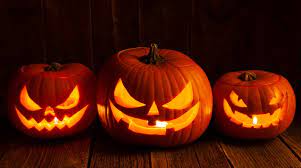 Halloween had its origins in the festival of Samhain among the Celts of ancient Britain and Ireland. On the day corresponding to November 1 on contemporary calendars, the new year was believed to begin. That date was considered the beginning of the winter period, the date on which the herds were returned from pasture and land tenures were renewed. During the Samhain festival the souls of those who had died were believed to return to visit their homes, and those who had died during the year were believed to journey to the otherworld.

People set bonfires on hilltops for relighting their hearth fires for the winter and to frighten away evil spirits, and they sometimes wore masks and other disguises to avoid being recognized by the ghosts thought to be present. It was in those ways that beings such as witches, hobgoblins, fairies, and demons came to be associated with the day. The period was also thought to be favorable for divination on matters such as marriage, health, and death. When the Romans conquered the Celts in the 1st century CE, they added their own festivals of Feralia, commemorating the passing of the dead, and of Pomona, the goddess of the harvest.

In the 7th century CE Pope Boniface IV established All Saints’ Day, originally on May 13, and in the following century, perhaps in an effort to supplant the pagan holiday with a Christian observance, it was moved to November 1. The evening before All Saints’ Day became a holy, or hallowed, eve and thus Halloween. By the end of the Middle Ages, the secular and the sacred days had merged. The Reformation essentially put an end to the religious holiday among Protestants, although in Britain especially Halloween continued to be celebrated as a secular holiday.

Along with other festivities, the celebration of Halloween was largely forbidden among the early American colonists, although in the 1800s there developed festivals that marked the harvest and incorporated elements of Halloween. When large numbers of immigrants, including the Irish, went to the United States beginning in the mid 19th century, they took their Halloween customs with them, and in the 20th century Halloween became one of the principal U.S. holidays, particularly among children.

We celebrated our Happy Halloween at Lexis today, with a best costume competition and a Halloween make up activity held by Nicole. 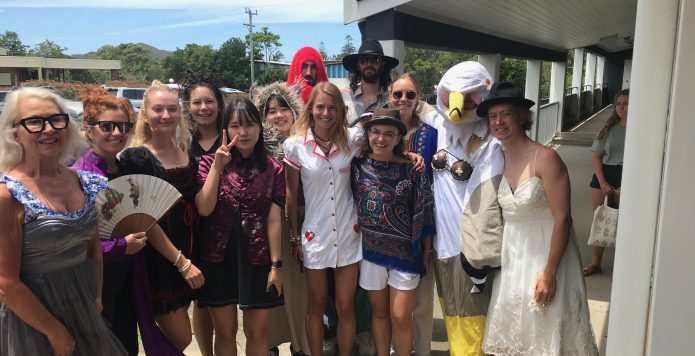 Because all the customs and ideas were brilliant, it was too hard to choose one winner so Lisa, Nicole and Dominic decided that all 3 classes are winners! All three classes will receive some money to organise a class party with snacks and drinks on Friday.

The title for the best costume went to Riina!

After class Nicole was doing a Happy Halloween Make – up activity. A few students joined to get their scary Make-up done. 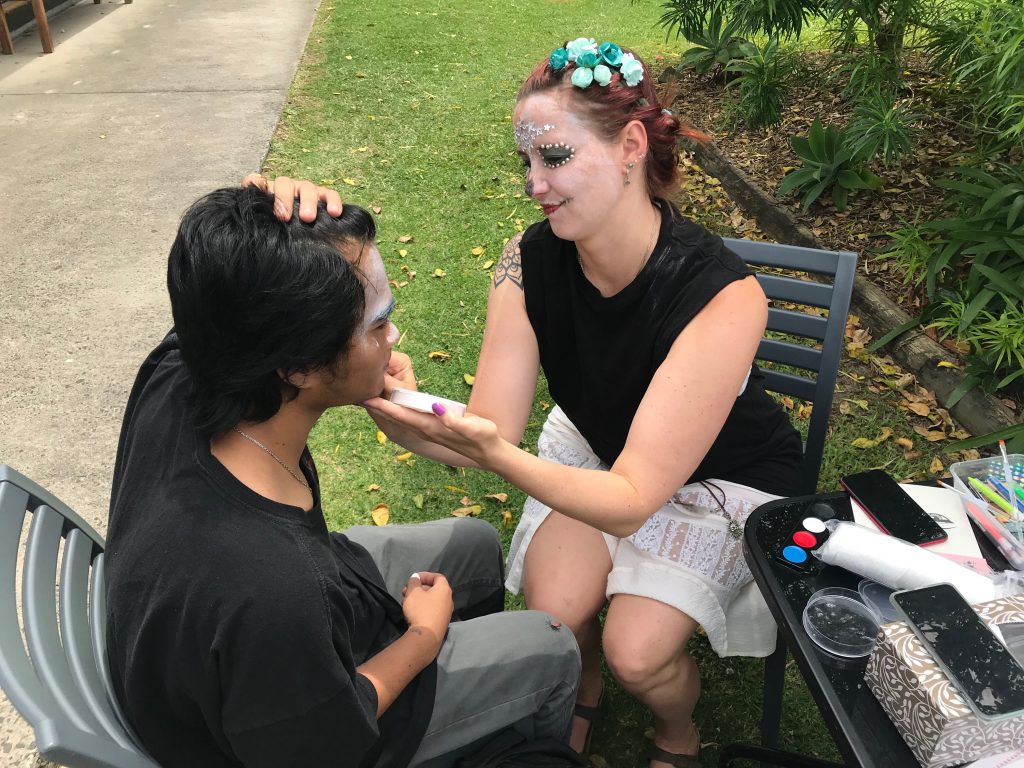 A dedication to the deceased – Happy Halloween / Day of the Dead

Day of the Dead (Dia De Los Muertos) celebrated in Mexico, is a two day holiday that reunites the living and dead. Families create ofrendas (Offerings) to honor their departed family members that have passed. These altars are decorated with bright yellow marigold flowers, photos of the departed, and the favorite foods and drinks of the one being honored. The offerings are believed to encourage visits from the land of the dead as the departed souls hear their prayers, smell their foods and join in the celebrations!

Day of the Dead is a rare holiday for celebrating death and life. It is unlike any holiday where mourning is exchanged for celebration.

Spirits of the children: Dia de los Angelitos (Day of the little angels) starts the holiday at midnight on Nov 1st, where the spirits of all deceased children are believed to be reunited with their families for 24 hours. Families construct an altar, known as an ofrenda, with the departed child’s favorite snacks, candies, toys, and photographs to encourage a visit from their departed children. The names of the departed children will often be written on a sugar skull.

Spirits of the adults: At midnight of the following day (November 2nd), the celebrations shift to honor the lives of the departed adults. The night is filled with laughter and fun memories, much like the night before. However, the Ofrendas take on a more adult-like theme with tequila, pan de muerto, mezcal, pulque and jars of Atole. Families will also play games together, reminisce about their loved ones, and dance while the village band plays in their town.

Spirits of all the dead: The next day is the grand finale and public celebration of Dia de Muertos. In more recent times, people come together in their cities, dressed up with Calavera painted faces (Skeletons) and have parades in the streets. Cemetery visits are also common on the last day as families will go to decorate the grave sites with Marigold flowers, gifts, and sugar skulls with the departed’s name on them. It’s customary to clean the grave stone and restore the color.

How people celebrate the Day of the Dead

Calaveras (Skull)  are often drawn with a smile as to laugh at death itself. They take many forms such as sugar candies, clay decorations, and most memorable: face painting. Sugar skulls are decorated and placed on offerings for loved ones. A Calavera, or sugar skull, is a decorative skulls made (usually by hand) from either sugar (called Alfeñiques) or clay which are used in the Mexican celebration of the Day of the Dead.

If you want to know more about the “dia de los muertos”  and the Happy Halloween, please click here

Dominic went with the students to one of our local Byron Pubs, to celebrate Happy Halloween and their make up/costumes.