On Tuesday, Rueben from our local travel agency took the students down to Main Beach for a Volleyball match.

The weather was perfect and many students joined this popular activity. 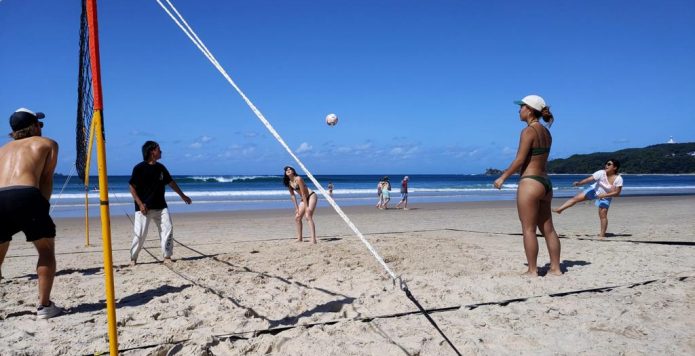 Everybody knows Beach Volleyball, but what are the main rules?

Beach volleyball is a team sport played by two teams of two or more players on a sand court divided by a net. Similar to indoor volleyball, the objective of the game is to send the ball over the net and to ground it on the opponent’s side of the court. Each team also works in unison to prevent the opposing team from grounding the ball on their side of the court.

Teams are allowed up to three touches to return the ball across the net, and individual players may not touch the ball twice consecutively except after a touch off an attempted block. Making a block touch leaves only two more touches before the ball must be hit over. The ball is put in play with a serve—a hit by the server from behind the rear court boundary over the net to the opponents.

The receiving team typically uses their three touches to pass the ball, set it up for an attack, and then attack the ball by sending it back over the net. Meanwhile, the team on defense typically has a blocker at the net and a defender to cover the ground. The rally continues until the ball is grounded on the playing court, goes “out”, or a fault is made in the attempt to return the ball. The team that wins the rally scores a point and serves to start the following rally. The players serve in the same sequence throughout the match, changing server each time a rally is won by the receiving team.

If you want to read more about the rules, please click here

There was music and cold drinks and the time flew by as everyone, whether playing or just relaxing and watching on the sideline, was having a great time.

Follow these links, to find out what else our students have been up to 🙂
Boomerang Painting
Christmas Cookies
Yoga with Elizabeth